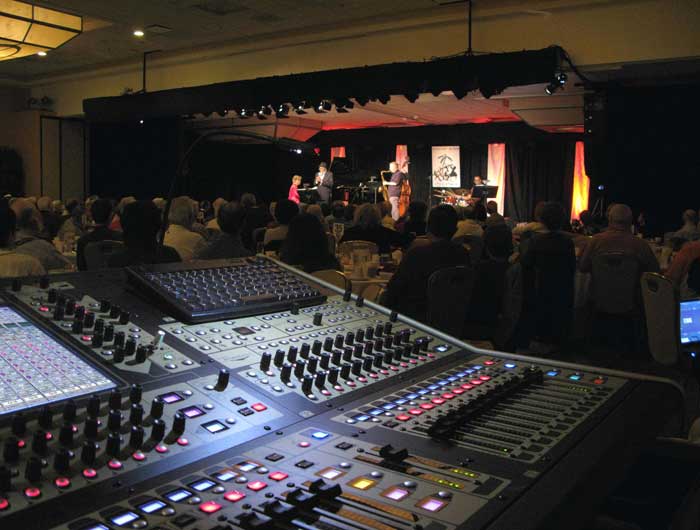 For almost 20 years, SEAS has been involved in two significant local jazz festivals, the West Coast and Newport Beach Jazz Party events, held in Southern California. The mid-February Newport Beach Jazz Party featured the traditional jazz festival fare, but this year for the first time, it also included an actual performance of musical theatre. Mitch Grant, SEAS audio engineer for this event, brought in a newly purchased DiGiCo SD8 to handle the diverse range of performances, and to work in tandem with his Nexo Geo S8 line array, and found the console—his first actual DiGiCo purchase—far exceeded his expectations.

“This is usually a slower time of year for me, so there haven’t been that many opportunities to use my SD8 since I received it,” Grant confessed. “Consequently, I had only used the SD8 a couple of times in somewhat less critical mixing situations, where I would have the time and opportunity to play with it and learn some things about it. The 4-day festival allowed me to really dig into the console and evaluate its performance while driving our Nexo Geo S8 line array that I’ve used previously in that hotel ballroom with great success. The stage area is heavily draped and the room ends up sounding pretty darn good for a simple ballroom.”

In addition to the music performances slated for the weekend, the festival opened with “Louis & Keely”, a musical theatre performance by Hollywood film bio-pic director, Taylor Hackford (“Ray”, “La Bamba”), staged in the 600-seat ballroom of the Marriot Hotel. “With no rehearsal, and barely time for a quick sound check with all the actors on stage, I had to mix 6 actor lavaliere mics, a vintage looking Shure 55SH lead vocal mic, an “announcer” mic at FOH, a handful of sound cues, and a full 6-piece back up band where some of the musicians also had dialogue in the show. No one from the show thought to bring a script for me to follow—and this was a 90-minute show that I had never seen! So much for the idea of bringing the SD8 on a show where there was ‘no pressure’! However, the easy user interface qualities of the board made everything better. I was able to quickly create some special FX for sound cues and confidently use them, even without any rehearsal. Honestly, I think the regular production people for the musical were shocked at how close we got it on the first try! It has been a while since I did any real live ‘theatre’, and I’m happy to say that the performance went off without a hitch.”

Grant says he found the SD8’s onboard EQ very satisfying, and ‘noteworthy’—but what surprised him was that it completely changed his outlook on digital console EQ overall. “The EQ controls are intuitive to use, and very ‘analog’ in feel. The EQ sections on some digital boards often leave me wondering if they are actually working, because I have to make major changes before they become apparent. That is definitely NOT the case on the SD8! I found that subtle changes in the EQ on the console yielded subtle EQ changes in the system… exactly as you would hope for. I found myself much more involved and interested in using the EQ, not because things sounded bad, but because I suddenly had a digital tool that could make the musical, graceful changes that I wanted to make. I’m telling you, that was a revelation for me!”

Moving from the theatrical production into the regular jazz sets, they had only a few minutes to go from musical theatre-style audio to a full-on jazz big band. “The first group had 6 saxes, 4 trombones, 5 or 6 trumpets, a Yamaha 7’ grand piano, and a full rhythm section,” he recalled. “I quickly threw together a scene on the console and when the band hit, the mix was close, but a bit subdued. After a minute or so, I had stopped the bleeding and the mix started to take shape. I quickly noticed 2 more important things about the SD8: the compression and the FX both sounded very good! The reverb was very natural sounding and believable, and the channel compressors were very transparent. I was really starting to appreciate the sonic quality and ease of operation of the SD8 right about then. Earlier in the day, I had made up a custom label set for the faders using the “terms” I felt comfortable with. It was really easy to quickly insert the proper labels on every fader. In fact, I don’t think I even used any label tape the whole 4 days of shows! Also, the SD8 indicates which fader you are touching on the screen (yes, only 1 screen) by changing the color of the label name. I grew to appreciate that small detail too, because I didn’t even have to look at the actual faders much at all.”

The rest of the night and the rest of the festival went on nearly flawlessly, with no soundchecks or rehearsals before any set. And the superior sound quality was audibly apparent to attendees and performers alike. “Coincidentally, there are several regular patrons of these 2 jazz festivals that are in the audio/recording/ production side of the music business. There are also several “audiophiles” in the audience at any given time. Interestingly, my fellow audio enthusiasts in the audience shared my perception that the sound system sounded better and more detailed than ever—and the only thing I changed was the console. Even the artists who were listening to their peers perform were coming up to me with compliments. One Jazz Choir director even asked if she could hug me after the conclusion of her stellar sounding set!”

In the near future, Grant plans to integrate a computer and MADI recording interface into the setup, as well as a few outboard pieces to finish the whole FOH mixing package. But even in its basic configuration, he says he found the SD8 to be truly impressive. “Even though it is the least expensive console that DiGiCo makes, it’s not an entry-level product, in my opinion. It is a fully professional console, built like a tank and designed to compete with the very best sounding boards available. It has a more basic feature set than its big brother, the SD7, but it is a feature set that would probably work for most people. It should not be compared with anything that costs less than it does, yet I think there are many consoles at 2 or 3 times its cost that it will easily outperform. I’m really happy that I bought one. In my book, any product that makes it easier for you to ‘hit it out of the park’ on your shows is worth its weight in gold.”