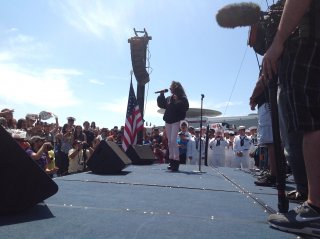 In May of 2012, SEAS was called upon by “American Idol” to provide a major sound system for the thousands of Jessica Sanchez fans at her hometown rally aboard the U.S.S. Midway, which is permanently docked in her home town of San Diego, California.
Performing through our Nexo S12 line array speakers and  Nexo RS15 subwoofers,  Jessica captivated and inspired the huge crowd  just a few short days before the winner of  season 11 would be announced.
Video clips from her performance at the event were shown on the national broadcast later that week. Mitch Grant, the audio engineer for the show that day, commented that her rendition of the National Anthem “was as good as any I have ever heard – including Whitney Houston’s memorable Super Bowl version”.

And Jessica-  we here at SEAS want you to know that even though you were the Runner Up this season, we are all extremely confident you will go on to do great things in the music industry. Interestingly, in the history of “American Idol”, second place finishers often go on to do bigger and better things than the winners do.
Thank you for representing San Diego so well, Jessica. We were happy to be a part of your incredible journey, and we have a feeling we will be hearing a lot more from you very soon!